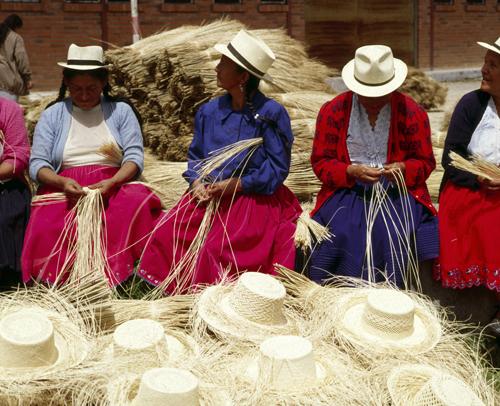 The Panama hat is a traditional brimmed straw hat of Ecuadorian origin. The hats are hand woven from Paja Toquilla, a palm-like plant which is indigenous to the coastal areas of Ecuador.

It is believed that the Panama was produced from as early as the 17th century, gaining notoriety from the 19th century onwards with miners from the California Gold Rush and the 26th American President Theodore Roosevelt often sporting one on trips through Isthmus of Panama and Panama Canal. The popularity of the hat was once again heightened in the early 20th century with the emergence of glamorous Hollywood. The movie stars donned Panama’s both on and off-screen, it became a fashion accessory of the elite and desirable. The popularity of the Panama in England however began in 1902 when King Edward VII requested one from his Bond Street Hatter and since has remained a classic and coveted summer style staple.

Today, the need for genuine Panama hats continues to provide livelihoods to these Ecuadorian craftsmen however the production is becoming strained due to the competing and ever-present Chinese hat producers.  The art of weaving the traditional Ecuadorian Toquilla Hat was added to UNESCO Intangible Cultural Heritage Lists in 2012. A programme which is directed at ensuring the protect of important intangible cultural heritages worldwide and raising societies awareness of their significance.

Previous: Millinery in Bloom
Next: The History Of Cooking